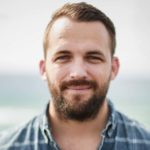 Tell us about yourself and how you came to be church planting.

Growing up by the beach in Australia, I moved to Denver, Colorado during my middle school & high school years while my family helped plant a church. It was during this time that I was exposed to the unique joys and hardships of church planting, and it was also during this time that I fell head over heels for an American girl named Kristina, who later became my wife!

As a young married couple in our early twenties, Kristina and I were team members for two church plants. The first was a catastrophe that God in his mercy eventually shut down; the second was the total opposite, bearing the fruit of many transformed lives and growing into a church-planting church. Six years later we landed in Seattle, where I was an elder at Mars Hill Church and led the student ministry before that church tragically imploded. It was a season where some of our deepest friendships were forged and some of our most important (and costly) lessons were learned.

A mentor of mine reached out and offered to plant us out of their church back in our home city of the Gold Coast, Australia. So we packed up everything and moved back to Australia to plant Liberti Church. Kristina and I are now coming up on 13 years of marriage and God has blessed us with five kids: Alaiya (9), Benaiah (7), Ezra (5), and our surprise package of twins Tayo & Elyana (2) who were born six weeks after we launched Liberti Church in the early part of 2015!

Tell us about Liberti Church.

We began a couple of years ago in a living room with a desire to plant a church-planting church that was gospel-centered in both its theology and culture. There really isn’t anything fancy about Liberti…we preach the Bible passionately, we worship together joyfully, we grow together in community, and we commit to living as sent missionaries within our city. And that’s what makes it beautiful. God has been very gracious to us, and earlier this year we got to send out our first church plant (Liberti Coomera) into the northern part of our city. We learned first-hand what it means to say ‘gospel goodbyes.’ A few months later we adopted a small congregation in our city who became Liberti Mermaid Beach, and sent out more of our people to help revitalize this church. We’ve reached wide and we are now drilling deep again in our three churches, with hopes of planting a fourth church in 2019/2020! You can read the whole story here.

What do you like to do when you aren’t church planting?

Church planting can easily become all-consuming, so I find myself drawn to anything that forces me to slow down. Family adventures/hikes, reading, naps, a cold beer by the beach, shooting hoops in the backyard with my boys, and watching the Golden State Warriors all fill my tank.

We have much work to do. Both Australia and New Zealand are deeply secular nations where less than 8% of the population attends any form of weekly worship service. The surrounding culture is growing increasingly hostile toward the message of Christ, and a large portion of the Church has been crippled by an over-obsession with pragmatism, hype, and motivational moralism. So the challenges are many. Yet there is a budding resurgence of gospel-centered theology in many streams of the church (particularly among many younger Charismatics/Pentecostals) that I have found incredibly encouraging, along with a growing desire for churches to become church-planting churches.

We have much work to do. Both Australia and New Zealand are deeply secular nations

What are you excited about in the Australia & New Zealand Network?

Over the past year, in particular, we have seen some exciting momentum building. In Melbourne, City on a Hill (Guy Mason) have sent out their 4th church planter (Dave Miers: City on a Hill Brisbane) and are getting ready to plant their 5th church later this month in the eastern suburbs of Melbourne, under the leadership of Nick Coombs. In Adelaide, Citylight Church (Don Reddin) recently sent Jake Swadling to plant Anchor Church in the lower socio-economic area of Port Adelaide. We are also seeing a number of existing churches join Acts 29 with the goal of maturing into multiplying churches themselves. But what excites me the most is that more than half of our churches are pregnant with a church-plant within the next 2 years!

We are also praying through how God might use our network as a springboard for church-planting throughout SE Asia – a part of the world that is still largely unreached that we are strategically positioned to reach into.

Why are you a part of Acts 29 and why did you step into the role of Network Director?

I can remember, as a younger man, listening to hours and hours of content from some of the Acts 29 boot-camps in 2007-2008. My theology began to reform, my missiology became more incarnational, and my heart was lit on fire with Acts 29’s vision to plant church-planting churches. I am deeply humbled to be invited into the role of Network Director and am so grateful for the camaraderie, global diversity, and direction in which God is moving our Acts 29 family.

How can we pray for Acts 29 Australia & New Zealand?

Adam is the Lead Pastor of Liberti Church, a gospel-centred family of churches on the Gold Coast, and Network Director for Acts 29 Australia & New Zealand. He is deeply passionate about preaching the gospel and struggles to keep his voice at an ‘appropriate’ decibel when doing so. He loves being married to Kristina, wrestling his five kids, and equipping church planters.