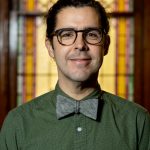 Related Posts
Why Your Ministry Needs to Multiply Matt Dirks The Unique Pressure of Being a Pastor Justin Buzzard Video: Redeemer Oakdale Acts 29 US West