On The Ground: Sololá, Guatemala

Series: On The Ground

The Acts 29 Rural Collective exists to promote, recruit, develop, coach, and resource rural church planting and church planters. To that end, each month we want to highlight a rural planter in our network so you can be praying for and supportive of the vital work they’re doing to bring the good news of Jesus to their small, isolated, or forgotten community.

Where do you serve?

We serve in the western region of Guatemala, in the highland area of Sololá (the equivalent of what you call a ¨state” in the USA). We’re surrounded by mountains. The community of San Pablo is one of the towns around Lake Atitlan. San Pablo is 99% Mayan. There are more than 20 Mayan groups in Guatemala each with different languages as their mother language. This creates ministry challenges!

Syncretism is a big part of our community’s life. This means even though they’ve heard and have some knowledge of the gospel, they still cling to Mayan-influenced practices (very animistic). Catholicism is also prevalent in the community and many people have difficulty distinguishing between faith in Christ alone, and good works as the means of salvation.

There’s about 5,000 people in our community. Some earn a living cutting wood from the mountains and selling it in nearby towns. Others fish in the lake and sell their daily catch at the market, or work the soil and sell the produce. A few people have small grocery stores (not like the ones you see in the States). The other important source of income is tuc tucs (three-wheeled auto rickshaws). Four years ago, violence was a serious problem until people were able to find work as tuc tuc drivers. Thankfully, violence has dropped significantly. However, substance abuse remains a problem in our community.

People live in small soil houses, adobe mostly. They can pack more than 10 people in one dwelling. Families typically live with five or more people in one room of less than two hundred square feet, with two or three people per bed in some cases. Many girls, as young as 15, move into their boyfriend’s family’s house, often quitting school believing it’s no longer relevant for them. They think there’s nothing in their schooling that they’ll use as adults. This demonstrates their lack of hope. 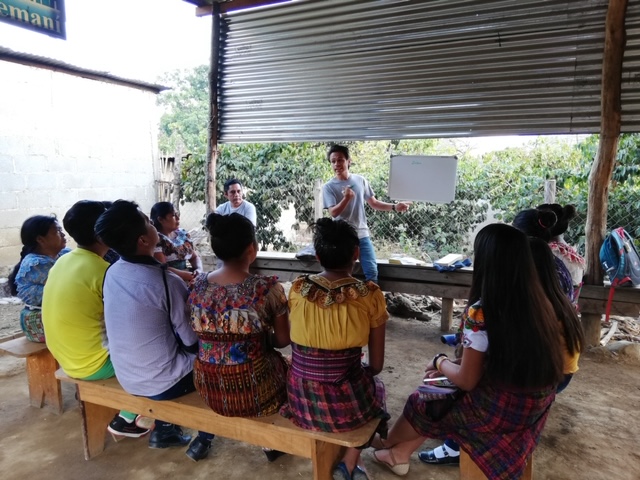 Our church, Iglesia Vida en Cristo (Life in Christ Church), is two years old. Our “building” consists of eight wooden poles with tin sheets as cover, a dirt floor, and wooden benches. We have about 30 members. Many are struggling to understand the difference between Christianity and Catholicism. One of the main beliefs is that everyone worships the same God, so it doesn’t matter who you follow at the end of the day; all gods lead to God (the real one).

My wife (Noemi) and I have been training a couple from the community to be the future leaders of the church plant. Vicente as the pastor, and his wife, María, teaching the kids. One of their sons leads worship. We’ve seen how the time and resources invested in them has been fruitful. They’re now more aware of their role as future leaders. I’ve seen how they’ve grown in the faith and are more involved in the mission. In fact, during this global pandemic we haven’t been able to see them due to government restrictions, and they’ve been the ones in charge of visiting families from the church and the community. We’ve been sending the money from the donations to them, and they’ve been responsible for buying food and supplies for those in need. This situation has provided a great opportunity to disciple and share the gospel with others.

We remind church members that the future matters greatly and eternity is real. A glorious inheritance awaits them!

Before the pandemic began, we’d gather for Sunday services which lasted about an hour. We sang songs and listened to the gospel. After that we’d hang out for a while. While the adults were in the service with me and Vicente, the kids met with Noemí and María. They’d hear Bible stories, memorize songs and verses, and make crafts. Every month or so they’d step into the adult service and sing the songs they’d learned along with some Scriptures.

On Saturdays, we’d have our youth meetings. We’d gather with 20 boys and girls and try to make it as interactive as possible. Our goal is to build a culture where they can find refuge and hope, a space where they feel understood so they can open up to us. We pray this will provide opportunities for them to be encouraged in their faith and stay away from drugs and temptations.

House visits are all about encouraging others. We pray with and for people. We remind them they’re not alone, but part of a church that extends beyond our community. We remind church members that the future matters greatly and eternity is real. A glorious inheritance awaits them! We encourage them to be disciples that make disciples wherever and whenever.

How can Acts 29 churches support you?