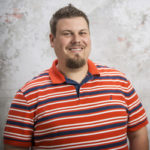 By this time next year, the number of Acts 29 churches throughout Latin America will more than double. Through these church plants in Brazil, Chile, Ecuador, Guatemala, and Mexico, the gospel is being preached, disciples are being made, and saints are being equipped to live on mission. Over the summer, the Acts 29 US Southeast Network through Mosaic Church in Orlando, Florida have been working to connect Acts 29 churches in the Southeastern U.S. to this work being done in Latin America.

Watch the video below to see our vision and learn how you can be involved with this work in Latin America.

Join us in praying for the leadership team of the Latin America Network:

Francisco Bendfeldt, Co-Network Director | Latin America
Francisco began his ministry as a teenager and during the last 20 years has preached in several countries around the world. He is the lead pastor of Casa de Libertad in Guatemala City and has a passion to reach others with the Gospel through church planting. He lives in Guatemala with his wife Carol and his 4 children.

Justin Burkeholder, Country Coordinator for Guatemala | Latin America
Justin pastors at Iglesia Reforma, in Guatemala City. He is the coordinator for the country of Guatemala. Justin and his family moved to Guatemala with a passion to see the gospel planted, and churches multiplied. He is married to Jenny, and has two daughters, Isabella and Olivia.

Cristiano Gaspar, Assessment Director | Latin America (Brazil Region)
Cristiano is planting Comunidade Batista Macaé, a new church in the state of Rio de Janeiro, Brazil. Cristiano serves as a leader in the Projeto Plantador church planting residency. Cristiano has a Bachelors In Business Management. He is married to Edna, and the father of Mariana and Alice.

For more information regarding the Acts 29 US Southeast Global Partnership with Latin America, visit this webpage on the Mosaic Church website or contact us here.

Gabriel Forsyth is the director of groups and mission at Mosaic Community Church in Oakland, FL. He serves as the Global Partnership Liaison between Acts 29 US Southeast & Acts 29 Latin America. He is married to Tiffany.