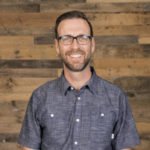 Related Posts
Going The Distance: Cultivating Rhythms of Health Joel Limpic Raising Church Planter’s Kids Amy Brown The How, Who, and What of Leading Worship Matt Butler
US Office: