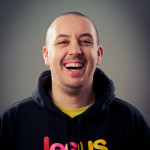 If you’d like to know more about our new church planting adventure or the work of Red Community, you can find me on Twitter: @daihankey or email me: daihankey@gmail.com.