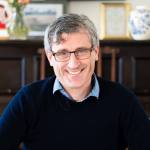 Philip Moore is married to Rachel and they have 5 children. In 2006 Phillip moved to France to pastor a church in the Paris area. Since then, by God’s grace, the church has planted 3 daughter churches and trained and sent a couple to plant a church in the centre of Paris. He is now the Network Director for Acts 29 Europe and our VP for Training.